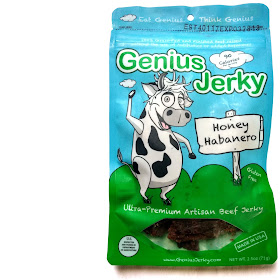 Genius Jerky was founded by Richard Plebuch in 2012, based out of Lovettsville, VA. Plebuch has long held an affinity for the culinary arts and in 2009 began pefecting recipes for jerky.

After raising funds through a Kickstarter campaign in 2016, Genius Jerky has been selling in markets throughout Virginia and Maryland, as well as from its own website.

The first flavors that hit my taste buds are a touch of sweet, a light salt, and hints of soy sauce. The chewing brings on a savory wave of seasonings, with the Sriracha adding its garlic and jalapeno components. There's a bit more sweet, a moderate level of heat, and a whisper of honey flavor mixed in. The latter part of chewing brings in a light natural meat flavor, while a light habanero pepper flavor becomes more noticeable.

As for being named, "Honey Habanero", it holds up somewhat. I do get a fair amount of sweet, though just a touch of honey's signature flavor. The habanero yields only a moderate level of heat, not quite the higher burn that habanero peppers are known for. I'd rate this on our heat scale as "medium" (level 3 out of 5). The habanero chile flavor is there, but it's hard to discern from the Sriracha.

Otherwise, the primary taste profile is a soy sauce and Sriracha mixture, where the savory "umami" meets the garlic and jalapeno, but it's layered with additional sweet, a little bit of honey and habanero flavors, and touches of beefy character.

The meat consistency is excellent. These appear to be slices of pure meat, with little to no fat visible. They are soft and easy to chew. They have a meaty nature, but not quite a steak-like texture. They tend to be a tad mushy.

This Honey Habanero from Genius Jerky adds a new twist to the classic sweet-heat jerky with some garlicky Sriracha, and a more savory marinade to create something that departs from the lot of other sweetened chile pepper varieties. It's not quite as hot as I would expect from something named after the Habanero, it's well toned-down to suit greater audiences. The flavor of Habanero peppers comes through well enough, though I'm not sure if I'm tasting that or the Sriracha. Meanwhile, the easy moist chewing creates a lot of snackability and lends itself to non-stop face-stuffing. Overall, there's a good deal of chile pepper flavor in this from both the Sriracha and habanero peppers, in a tender, moist chew. 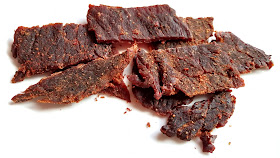 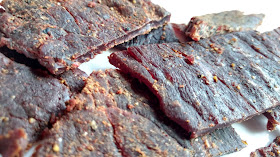