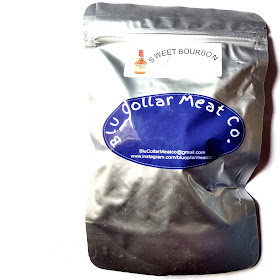 The name, "Blu Collar Meat Co." makes reference to Steven's profession as a welder. "We represent the working class, and everybody putting in work ... whatever your profession, we got the jerky for you".

This Sweet Bourbon variety is described as, "A subtle sweet, yet smooth flavor of bourbon infused jerky, that'll keep you coming back for more." The label has a photo of Maker's Mark, suggesting that's what it was marinated in.

The first flavors that come in are a light sweet, a touch of salt, and the taste of beef. The chewing brings on a bit more of the natural meat flavors. Hints of black pepper come in late into the chewing.

For being marketed as a sweetened, bourbon infused jerky, the flavor of Maker's Mark is faint. There is a light aroma of bourbon that wafts from the package, while the taste only tip-toes around palate with its woody, fermented character. Meanwhile, the "Sweet" half of the name is right on target with in a not-so-heavy, not-so-light balance.

Otherwise, the primary taste profile is a lightly salted, sweetened, natural meat flavor with touches of malt fermentation. The meat flavor has an aged character resulting from well-marbleized slices of round.

These slices are chewy, though still easy to bite off and get through. They eventually feel very steak-like, comparable to something cooked medium-rare. Despite the heavier marbleized cuts, I didn't encounter any stringiness or unchewable tissues.

This Sweet Bourbon beef jerky from Blu Collar Meat Co. delivers a light malt fermented character behind an aged, marbleized meat flavor backed up with a noticeable sweet and touches of salt, black pepper, and garlic. The soft, easy-to-eat slices gives a lot of snackability to this jerky while the light level of seasonings allows the natural meat flavors to shine through. While the use of Maker's Mark in the marinade remains light, it still give these slices of round a bit of that malty woodiness. But overall, it's the soft chewing, light seasonings, and marbleized meat flavors that seem to give this jerky much of its snacking satisfaction. 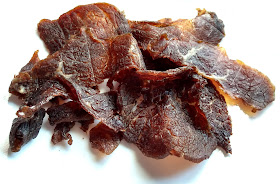 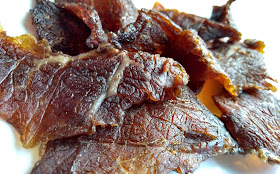