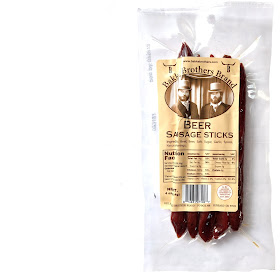 Bakke Brothers was started by Phil Bakke, one of Whiskey Hill'founders. The brand differs from The Jerky Hut in that it's free of preservatives such as sodium nitrite, sodium erythorbate, et al, and it's also gluten-free.

These "Beer Sausage Sticks" are made with, "...a flavorful dark locally made Oregon beer". The brand goes on to describe these sticks as having a, "Mild Smoky flavor with a hint of garlic."

The first flavors that come into view is a light salt and a touch of garlic. The chewing brings on a bit more garlic, some black pepper, and perhaps even coriander seed. There's a natural meat flavor that comes in later, along with a light bit of heat in the background.

As for being marketed as, "Beer Sausage Sticks" and make with a flavorful, dark Oregon beer, it's hard to identify the beer characteristics if you don't know what to look for. I do pick up a faint beer-marinade in the background, noted by the unique effects it has on the meat flavor. You're not going to taste straight-up malt and hops; it's really more of the way alcohol-based marinades give meat a more earthy character.

Otherwise, the primary taste profile is a lightly salted seasoning flavor, primarily of garlic and black pepper, and perhaps something extra, maybe coriander seed, over a natural meat flavor, and light spiciness.

These sticks have a firm bite with a light snap. They start out chewy, and a little rubbery, though as you deeper into the chewing they soften up. The handling is lightly oily. I didn't find any unchewable bits in these sticks.

These Beer Sausage Sticks from Bakke Brothers Brand generates a lot of good snackability through a garlic and black pepper-forward seasoning and a firm, meaty chewing texture. While the beer marinade has only a faint-to-light effect on this meat flavor, it's lightly noticeable for folks who are well-accustomed to alcohol-based marinades. These sticks have a fresh character through their firm bite and light snap on the casing. Don't expect a big, bold beer flavor in this, expect a meaty, seasoned palate, over a fresh, chewy bite.